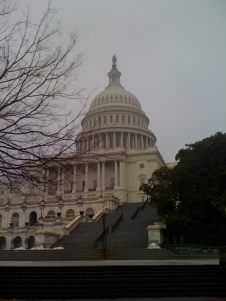 The Capitol on a cold day

The people who come and go in the Washington region are far more interesting than the politics. The District is an international experiment in culture and democracy. Folks from all over the world arrive with with eager agendas and work to do, giving downtown an energetic and anxious pulse. The place is both enlivened and burdened by the proximities of power.

It’s a good place for writers, and those whose research draws them here. The Library of Congress, the National Archives, the museums, coffee shops, and bookstores make it an intellectual paradise. It’s a magnet for journalists, for obvious reasons, but historians, ethno-musicologists, and conservationists also find their work here.  The Smithsonian is a breathtakingly large survey of ourselves and our environment, and Capitol Hill is always stewing in the issues of the day.

The H Street and U Street corridors pulse with histories of riot and redemption. The ancient and generational rhythms of the place are perpetually transforming with that creative heat. There has never been a better time for poets, I suspect, and I sense the club scene is back on the rise. There is a growing cadre of social issue documentarians who are grasping for all that new media can do.

The greater region is a patient, leafy reserve. Beautiful spaces for contemplation, both wild and manicured, are easily found near American University and Catholic.  You can visit the colonial remains in places like Georgetown and Riverdale.  There are scenes of great natural wonder just a bike trip or metro ride away.  My own life has transformed in many small ways under the protective shade of Rock Creek Park and the Arboretum.

The Washington Writer’s Retreat is an outpost to the whole scene, situated two blocks from Eastern Avenue in the artsy hillsides of Mount Rainier, Maryland.  You can hang around town in between trips to the city. Yoga and dance classes are a short walk, as is Island Style ice cream and the old Glut Co-Op whose motto is, “Still here, and still funky.” The long saga of our town’s pursuit of an independent coffee shop is best heard over a cup at Urban Eats or Shortcake Bakery.  You have to insist on paying, though.  People around here have a generosity that defies most traditional business models.

The four connecting small towns are a collection of artist workshops and local galleries all actively developing new work. It’s common to see a sculptor pushing a baby carriage down the street and dancers wafting their way to the welcoming studios and theater at Joe’s Movement Emporium.  There is an interesting conversation to be had on every corner.